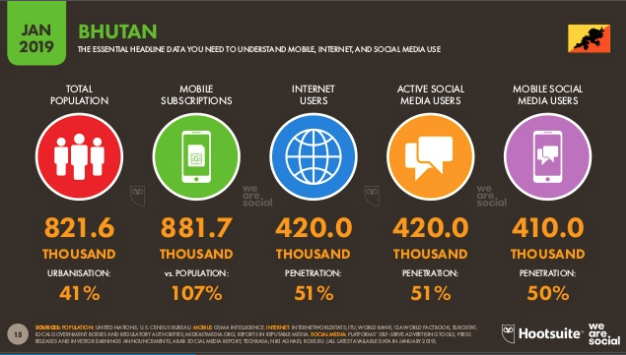 The Executive Director of Bhutan Media Foundation (BMF), Needrup Zangpo, talks to Business Bhutan reporter Chencho Dema on the current Bhutanese media scenario and what can be done to help and support especially the private media, and measures to retain journalists in the profession.

According to hootsuite.com, Bhutan has 370,000 active social media users (50% of the population) which have increased by 28% since 2017. That’s more than the readers of all the newspapers put together. A Facebook group called Bhutanese News & Forums, which is a cesspool of the lowest order of discussion, has 185,322 members, more than 23 times Kuensel’s daily print-run. This means shrinking space for professional journalism and growing space for unrestrained and chaotic space for citizens.

This question contains two questions. By media, if you mean the traditional media, particularly the private newspapers, we are talking about a host of issues beyond the scope of this interview. We are down to five newspapers and four radio stations but we are still talking about their sustainability, meaning they don’t earn enough to pay themselves. For a population swamped by social media before it learnt to read, there seems to be too many media houses born of the government’s liberal licensing policy. The sustainability challenge leads to several challenges, including high attrition rates, falling professional standards, and declining public credibility, all of which will again lead to the sustainability challenge.

We can consider a few options to address these challenges. These are, by no means, ‘solutions’. There is simply no room for more media houses, which means it’s time to reassess the wisdom of the liberal licensing policy. Public funding of the media can be discussed in more detail as a viable option for a strong and responsible media. It must be noted here that some form of public funding of the media is already happening. It’s time for the media houses to think smart and transition online to keep pace with media production and consumption trends.

People who consider themselves ‘citizen journalists’ often undervalue the role of the conventional media. Some say there is no need of newspapers, radio, and television for they get all news, views, and information from social media. But experience tells us that the media content created, disseminated, and consumed by a diverse group of individuals can not only be unverified but also misleading. That’s when we need to turn to stories in the conventional media that carry bylines and are filtered through a gate keeping process. The simple fact that there is someone to complain to when misinformed or disinformed makes a big difference.

However, the conventional media’s role is not just to scavenge the social media landscape and verify news and information as we are often given to understand. They must lead the discourse and set the agenda.

I have already answered the first part of the question in response to question 2. The media houses are losing experience and talent because they are not able to pay them adequately. This brings us back to the sustainability challenge. However, we must recognize that all professions lose experience and talent, and we must be prepared for that. Regular professional training and mentorship at different levels conducted by Bhutan Media Foundation is in response to the high attrition rate in the industry. Training and mentorship must continue to sustain professionalism.

This is a sweeping statement. Whatever you mean by ‘media development’, it cannot be linked directly to legislation and policies. Several other factors are at play. Having said that, right legislation and policies can make a world of difference to the media. For example, the media licensing policy can hugely impact the development of the media. And enacting a public service broadcasting act will go a long way in strengthening and professionalizing BBS.

This interview was published in Business Bhutan on 20 July 2019