Home > About Us > Establishment of BMF 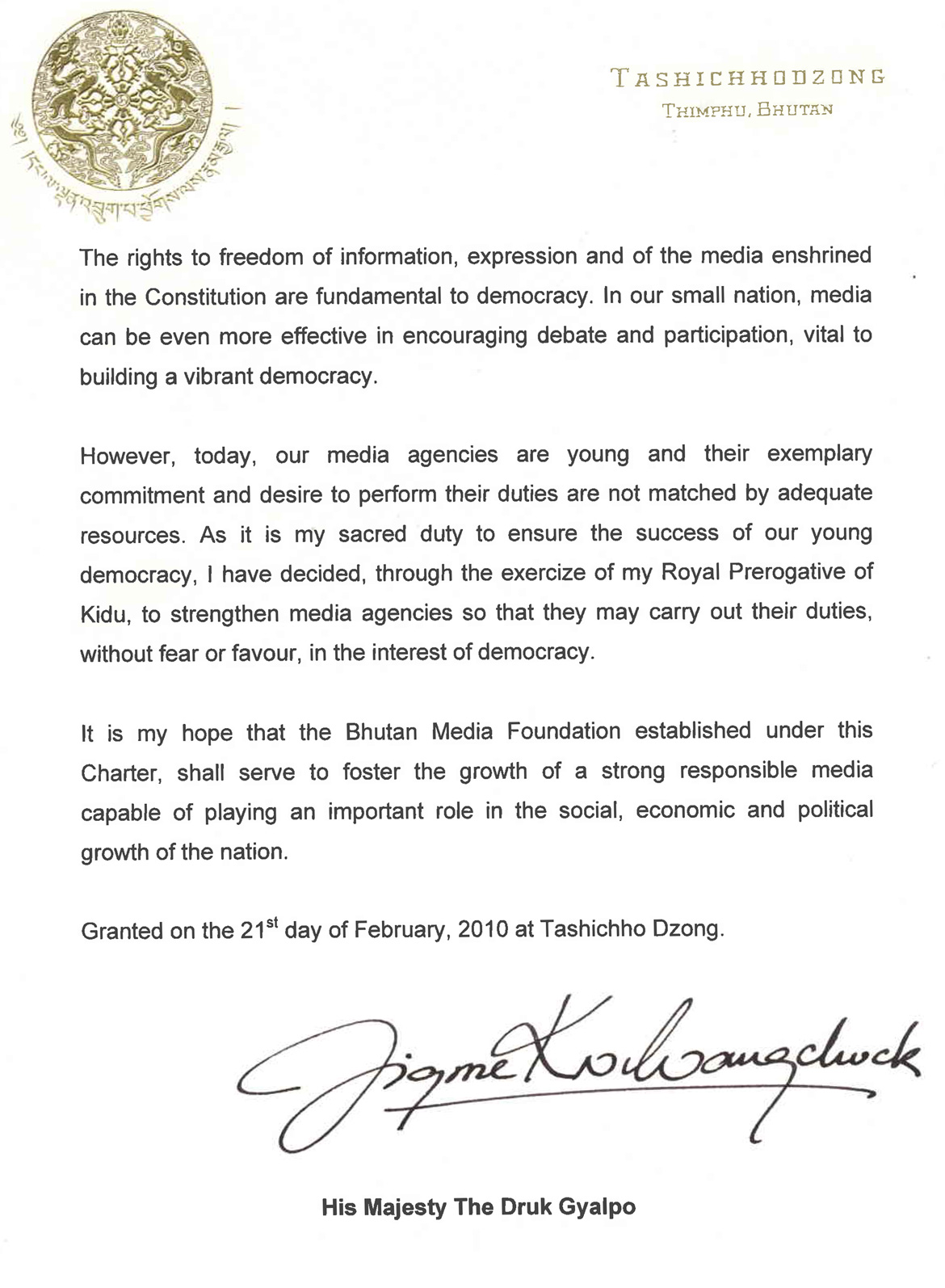 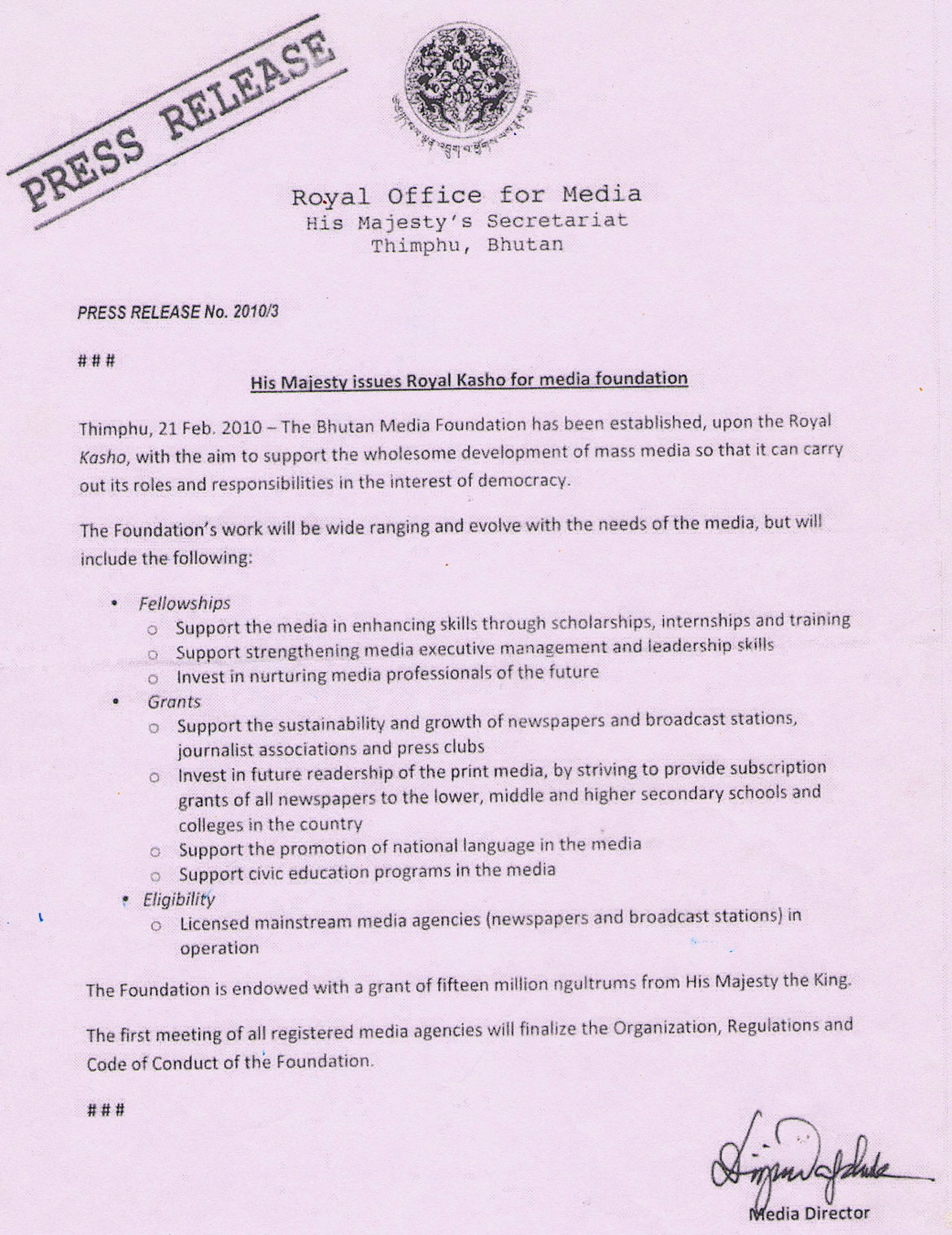 Formation of the Bhutan Media Foundation

His Majesty the King on the Media

His Majesty the King during the closing of the 3rd National Assembly session on 30th July 2009 announced his support to the news media in the following words.

“Media – newspapers, television, radio and the internet – must play a very important role. I appreciate that while some of the media agencies are young and lack adequate resources, they have strived to perform their duties with complete commitment. Hereafter, media will be vital in keeping people well informed and in encouraging debate and participation – key to a vibrant democracy. Therefore, I have decided that through the exercise of my Royal prerogative of Kidu, to strengthen media agencies so that they may carry out their duties, without fear or favour, in the interest of democracy.”

First meeting among the media on 15 August 2009

Draft charter submitted to His Majesty the King

The draft charter of the Bhutan Media Foundation was submitted to the Royal Office of Media in August 2009.

The second meeting was held on 8 March 2010 during which the media representatives to the BMF was elected. The working committee wrote a letter to the government requesting government representatives on the BMF Board. The representative of the media to the BMF are Tashi Dorji from BBS, Needrup Zangpo from Bhutan Observer, Tashi Phuntsho from Drukpa magazine and Chencho Tshering from Kuensel. The government proposed the names of Dasho Kinley Dorji, Hon’ble Secretary of MoIC, and Mr. Thinley Dorji, Chief, PPD, the Ministry of Foreign Affairs through a letter dated 7 May 2010.

The first BMF board met on the 24 May 2010 and discussed the appointment of Executive Director for the BMF. It was decided that an advertisement would be placed in all the newspapers and the radio/TV calling for application for the position of Executive Director. The announcement for Executive Director for BMF was placed in the media from 22 June 2010. When the application date closed on 30 August 2010, 15 applicants had applied for the position. However, one applicant withdrew her application. On 14 September 2010, the Board met and shortlisted the candidates to seven with the agreement that the list would be further shortened to about five candidates. On 1 October 2010, final shortlisting was completed in the office of the Secretary, MoIC. Three candidates selected for the interview, namely Kesang Samdrup from the Department of Revenue and Customs, Tenzin R. Wangchuk from the Ministry of Foreign Affairs, and Lily Wangchuk from Simple Solutions. The interview for Executive Director’s post was held on 6 October 2010 at the Office of Bhutan Observer.

A young democracy, fragile media and a Foundation

For a democracy to succeed, vibrant and independent media is critically important.

As Bhutan prepared for a change in governance, the plurality of media had to find a space. It was 2006. Bhutan Times and Bhutan Observer came. It was just the beginning. Many more would follow.

The early days of media growth was exciting. It was exciting because it fostered healthy competition. There was then the quality of journalism to talk about. It was as if Bhutan changed overnight.

Good days do not last forever. Bhutan’s media development hit the cul-de-sac not long after. Blame must go to regulations and poor vision on the part of regulatory authorities.

Six years after the media boom, media houses were going broke and whining. For media owners, it was money not professionalism. For the professionals, it was a dead end too soon. Seasoned journalists began to leave and that gave a new face to the Bhutanese media. It wasn’t only a rough ride; it was sad.

There was a need for intervention.

His Majesty the King on February 21, 2010 issued a Royal Charter to establish Bhutan Media Foundation, a non-profit entity that shall be exempted from taxes and duties in carrying out its activities and programmes “to foster the growth of a strong, responsible media capable of playing an important role in the social, economic and political growth of the nation.”

The foundation is mandated to support the wholesome development of mass media so that it can carry out its roles and responsibilities in the interest of the democracy. It is expected of the foundation to support the media in enhancing skills through scholarships, internships and training, strengthening media executive management, and leadership skills.

The foundation supports the sustainability and growth of newspapers and broadcast stations, journalists associations and press clubs, and invest in the future readership of the print media by providing subscription grants to the newspapers, schools and colleges in the country.

With the core responsibility to take effective action targeted at informing society by fostering the growth of free, independent, responsive and credible media, the foundation aims to sustain democracy by developing the Bhutanese media through transformational initiatives that promote quality journalism, advance media innovation, engage communities and foster freedom of expression, information and press.

The foundation has spent more than Nu 23 million on training and Nu 2.7 million for content grant

But there are myriad challenges.

The foundation receives small support from international partners to carry out its mandate to create opportunities for short and long-term studies and training within and outside Bhutan, support exchange programmes and links with training institutions, professional associations, research centres, and media organisations within and outside Bhutan, to support in-country journalism and mass communication programmes in colleges and institutes, support participation in seminars, workshops, and conferences on issues related to the media, and to institute in-country scholarships for journalism studies for Bhutanese students from disadvantaged backgrounds.

However, the plans and developmental programmes of the foundation is dependent on donors.

So far, more than a thousand media professionals have been trained. The foundation has spent more than Nu 23 million on training and Nu 2.7 million for content grant.

The foundation’s executive director, Dawa Penjor, said: “ Looking at the media scenario today, we wonder if our initiatives made any difference.”

The state of the media today is that the needs have not changed at all. The development of media has almost stunted. That’s why the foundation continues to provide the same training to the media professionals.

Despite challenges, the foundation sees many opportunities. Mentorship programme that the foundation started two years ago is perhaps the most sustainable initiative yet.  At a time when the media houses in Bhutan are losing trained and experienced professionals by droves, training and preparing young entrants have become critically important.

That’s how Dawa Penjor looks at the foundation’s future and its relationship with media in Bhutan.

The mission of Bhutan Media Foundation is to take effective action targeted at informed society by fostering the growth of free, independent, responsive and credible media that play a constructive role in the social, economic, and political life of the nation, thereby leading to vibrant democracy.