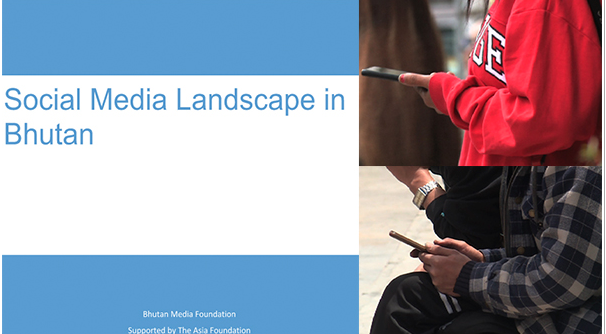 While using social media provides users with an avenue to many opportunities, the number of hours spent on various social media platforms has become a concern in Bhutan. According to a recent study conducted by Bhutan Media Foundation (BMF), over 90 % of the respondents spend nearly 3 hours on social media every day. That is more than the global average of over 2 hours.

The reach of social media is widespread. It runs rife in our homes, schools, politics and religious places.  The study shows that on average, a Bhutanese handles four social media accounts, with Facebook, WeChat, and YouTube being the three most popular platforms.

The survey reports that social media is used for SLIME, that is for Sharing, Learning, Interacting, Marketing and Entertainment.

“I use Facebook and Instagram most of the time. As college student, apart from the studies, we get more free time and we get to spend more time on social media. I spend over 2 to 3 hours every day. Sometimes I spend almost 6 hours. But I know that we should not share sensitive issues and illicit contents,” added another college student, Kezang Dechen.

Bhim Bdr Gurung, a TTI graduate said, “I use 2 to 3 hours at night but not continuously. It is wasting a lot of time. Many youth also waste their time on social media”.

According to the survey, spam and indecent posts are the two most reported negative individual experience on social media.  It also shows that more than 50% of social media users in Bhutan have little or no awareness of privacy and ethical issues.

Tenzin Yangden, a Program Officer with the BMF said some of the findings of the study are quite worrisome. “For example, the time Bhutanese spend time on social media is quite high compared to the global data. So it’s quite high and alarming as well. We Bhutanese tend to use social media anonymously, so that is also a worrisome trend. Social media has become a very powerful force in Bhutan but mostly a socially destructive force due to the irresponsible use led by an increasing number of anonymous users.”

The nationwide survey was conducted on 1,200 respondents through interviews and emails.  Representatives from  26 government, private, and civil society organisations took part in the survey.

Bhutan Media Foundation is developing social media literacy modules to educate and remind the people of potential harm and responsible use of the platform.

“The findings of the study has led to the development of three separate social media literacy training modules. One for the illiterate and semi-illiterate section of the population, one for the high school and college students and one for the working professionals including the politicians. The modules will comprise of contents based on their specific needs comprising of contents on how to use social media responsibly, how to identify fake news, how to stay away from spam, do’s and don’ts on social media and how to stay away from cyberbullies,” said Tenzin Yangden.