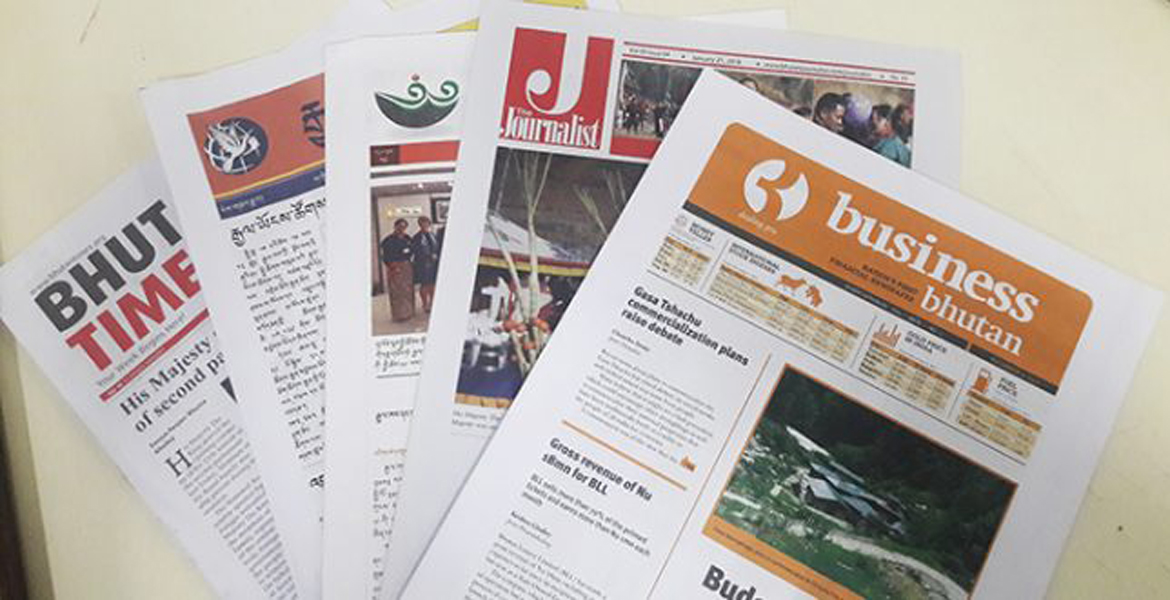 The government approved 50 percent subsidy for the private papers in the country.

Executive director with Bhutan Media Foundation (BMF), Needrup Zangpo, said that subsidy would be provided for 50 percent of the minimum number of copies required by BICMA. “That means that the government subsidy is paying printing cost for 50 percent of the copies. For English private newspapers, the government is paying for 600 papers and for 300 copies of Dzongkha.”

The subsidy was approved from the month of July this year for two years.

Tashi Tenzin added that for the fiscal year 2018-2019, a total budget to Nu 2.609 Million was approved as printing subsidy.

Half of the subsidy budget amounting to Nu 1.304M have been transferred to the BMF for disbursement as per directives from the Ministry of Finance. The budget is transferred bi-annually to the BMF.

“When the budget for subsidy for the 2018-2019 fiscal year was released, instructions was received from the MoF that for the second year, that is for the fiscal year 2019-2020, the budget might need to be formalised by the next government,” Tashi Tenzin said.

Sustainability has been highlighted as one of the biggest challenges faced by the private newspapers.

Editor to The Bhutanese, Tenzing Lamsang, said that the sustainability challenge affected the quality of the story, number of reporters and led to other issues in the newsroom. He added that the media in democracy play national level roles and responsibilities, however, when it came to resources, media was at the bottom of the priority list.

“We are hopeful that the new government would address this issue as promised in their manifesto. One of the biggest problems is that we have a very small private sector, so private sector is not able to sustain the media,” he said.

While the subsidy is deemed a short-term measure for the survival of the private media firms, Needrup Zangpo said that a change in policy and the private papers transitioning to online system would help media firms achieve sustainability.

He said that due to sustainability issue, newspapers such as Bhutan Observer, Druk Yoezer and magazines such as Drukpa and The Raven had shut. “At one time, there were 12 newspapers. Now, we have only 8 including Kuensel.”

Today, BMF is helping the media firms develop apps and website as a means to going online in the future as traditional hardcopy is no longer seen as sustainable.

“I think it is inevitable and all of the private papers are trying to move online. BMF is doing all it can to help this transition. On behalf of all the private papers and the media industry generally, BMF would like to thank the government for the generous support. With the new government we hope more support will come,” Needrup Zangpo said.