Home > Stories > The Media Circus Gets a Divine Intervention

The Media Circus Gets a Divine Intervention 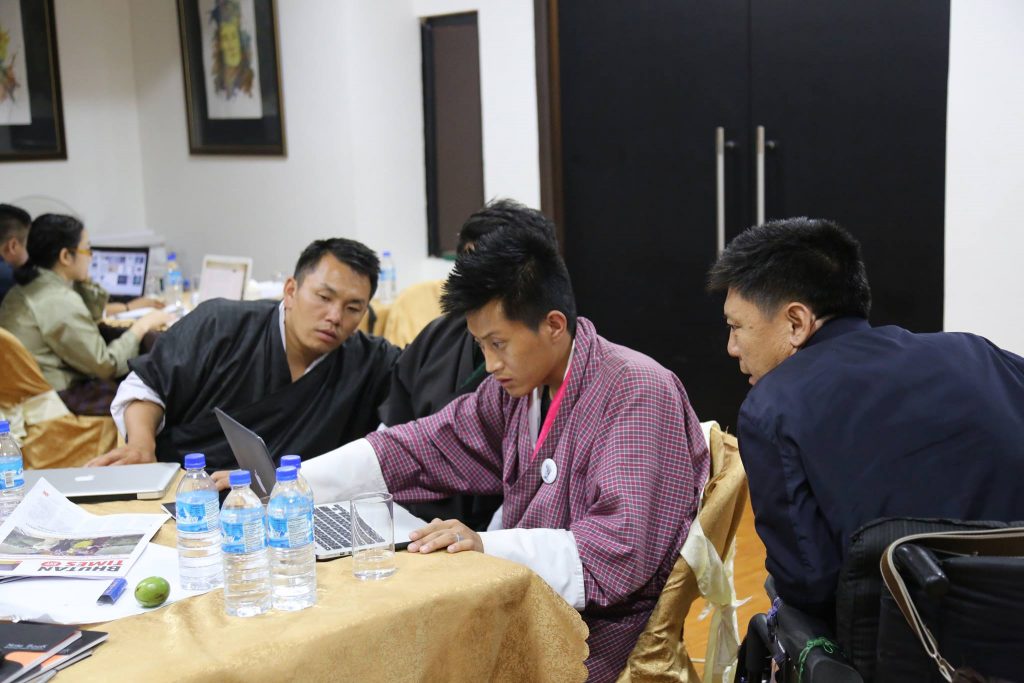 Up until 2006, the media boat had lesser captains, but at status quo, it has become a tempestuous ride with the growing numbers of captains onboard. The Bhutan Media Foundation (BMF), mandated to make things better, started with what was perhaps the most amicable and fruitful workshop last Friday with focus on common goals minus the usual spars and jabs. A good beginning, the captains agreed.

The Bhutan Media Foundation played wishing well with the media stakeholders in a consultation meet last week where grievances were poured out by the gallons and wish lists narrated in dozens.

The freshly activated foundation sincerely expressed its limitations on fast-delivery of most the goods.

However, all is not teary eyed for the media entities; because the foundation, which has been established on royal command and drawn on a royal charter from no less than the Throne itself, can safely be surmised as more than a flicker of burning hope burning for not just the existence of the media but its growth and role in the broader sense.

One way in which assistance from the foundation could be coming soon or deemed feasible is provision of basic training in reporting for media houses whereby the reporters fresh in the profession will be trained to gather news and report facts without error.

The foundation stressed on in-country training because it would save cost. However, media pros were of the opinion that exposure through ex-country training in reputed papers would still be the better option. Participants also said three was a need to promote or develop a nodal institute to deliver trainings for the media.

Some immediate activities that will be undertaken by the Bhutan Media Foundation will include supporting a media baseline study to assess the current status.

“The baseline study will help BMF assess the impact of their interventions carried out in collaboration with other relevant agencies in the future. BMF also has plans to conduct needs based training analysis which will enable them to formulate customized needs based trainings and courses for the media that will shortly follow,” said Lily Wangchuk, executive director of the foundation.

The day-long consultation meet identified many other issues pertinent for the media houses of which the following were highlighted and discussed: The sustenance of media firms, lack of professional capacity of the media, editorial independence, licensing rules, immunity for journalist, need for creating enabling legislative environment, difficulties with reach of media to other parts of the country, need for creating a journalists’ fraternity for a common voice, challenges with printing and distribution and challenges with access to information in the absence of the RTI Act.

The participants also highlighted the need to include new media and non-traditional media and the need to enhance access to information, equitable distribution of government advertisement, need for audit of content besides circulation to promote a healthy competition, need for subsidies, tax holidays/exemptions. The participants further highlighted the importance of supporting the formation of a press club, a media council and bringing back from the dead the Journalists Association of Bhutan.

All mainstream news agencies were present at the workshop, represented by managerial and editorial teams as well as technical people comprising professionals from various backgrounds.

During the day-long event, participants were involved in a number of group discussions and exercises in identifying key strategic interventions to address the common issues and challenges and prioritize the broad thrust area within the broad mandate of the Bhutan Media Foundation.

Bhutan Media Foundation was established under the Royal Charter to foster the growth of a strong, responsible media capable of playing an important role in the social, economic and political growth of the nation. The foundation is mandated to support wholesome development of mass media so that it can carry out its roles and responsibilities in the interest of democracy.

His Majesty the King has granted on initial seed fund of Nu.20 million to support BMF’s initials activities.